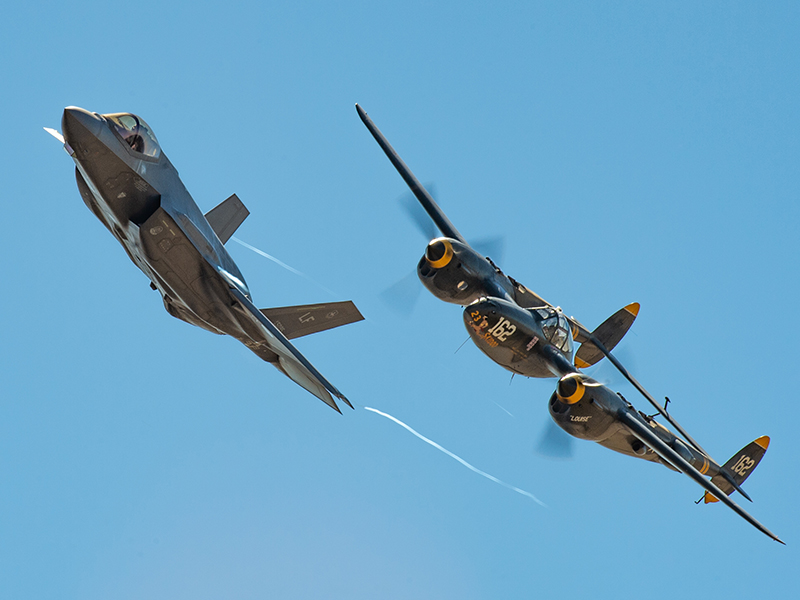 Lockheed’s P-38 Lightning is in a league of its own. As one of the most influential fighters during World War II, the “fork-tailed devil” flew more than 130,000 missions in theaters across the globe and was a crucial weapon in the American arsenal. The P-38 was even the preferred aircraft for America’s top two aces – Dick Bong with over 40 aerial victories and Tommy McGuire with a credited 38 victories.

While over 10,000 P-38s were built, it was retired from service following the end of World War II. Today, only about half a dozen P-38 Lightnings are still flyable, and one of those is Planes of Fame Air Museum’s “23 Skidoo.”

“23 Skidoo” is a P-38J Lightning that was built in Burbank, California as the 5,018th aircraft produced by Lockheed. This distinctive number is also exactly half the total number of Lightnings produced. It was delivered into service in May 1944 as part of the 483rd Air Base Squadron in Santa Maria, California where it was used for combat training during World War II. In the fall of 1945, it was transferred to the Hancock College of Aeronautics where it was used to teach maintenance personnel until 1959.

After being acquired by the museum in the late 1950s, this aircraft was a featured exhibit and commemoration of World War II fighters for almost 30 years. In 1988, after a 13-month restoration, Steve Hinton’s Fighter Rebuilders officially restored this P-38J Lightning to flyable condition as “Joltin’ Josie.”

“It took every bit of 13 months, and we were fortunate to have a lot of help from others as well,” Hinton said. “While we were working in Chino, the engines were done in Minneapolis by JRS Enterprises, and the propellers were overhauled at another place too. It really was a team effort.”

The P-38 flew as “Joltin’ Josie” for over a decade in its signature black and white D-Day invasion stripes. From “Josie,” it was repainted again to honor Major Edward Cragg's “Porky II.” Cragg was a Triple Ace in the 80th Fighter Squadron in the Pacific Theater, and he remains Missing in Action today.

When Planes of Fame decided to curate a first-of-its-kind exhibit for the 475th Squadron, Hinton decided to repaint the P-38J once again, this time as World War II Pacific Theater Ace Capt. Perry Dahl’s “23 Skidoo.” The name “23 Skidoo” was a phrase from the 1920s which meant “getting out while the getting’s good.”

“We’ve always been in touch with [the 475th Squadron’s] pilots and crew members through the years, and they were pulling all their memorabilia together to establish an exhibit so their story can be carried on,” Hinton said. "We ended up picking Perry just because he was one of the members, and we loved his story.”

Once the exhibit was finalized, Hinton and Planes of Fame hosted the 475th Squadron for a celebration and commemoration. There, Capt. Dahl was able to ride in the back of “23 Skidoo,” the first time since his service in World War II.

“He was laughing and giggling the whole time,” Hinton said. “The whole day he was telling stories from his days in the P-38 as a hot-shot young pilot in his 20s, and you could see his face light up as if he was right back in the cockpit decades ago.”

One story that particularly stood out to Hinton was when Dahl was separated from his group after some initial engine trouble. As Dahl looked through the clouds and started catching up to his group, he looked below to see five “Betty Bombers” (Japanese Mitsubishi G4M). It was his opportunity to be an Ace, and he took it.

As Dahl started to dive and drop his external fuel tanks, both engines quit. He had been pulling fuel from both of his external tanks and forgot to switch to the internal tanks. In the end, he couldn’t record a single victory that day, but it did give Dahl a great story to share (and laugh about) with Hinton.

To Hinton, the Planes of Fame Museum, and the aviation community, “23 Skidoo” is a symbol of both chance and fate. As such a rare aircraft, which required months and months of restoration, it has quickly become a favorite performer at air shows and Heritage Flights. “23 Skidoo” was even featured in the 1992 film Iron Eagle III.

“If you’re an airplane person, you could spend months reading about the P-38 – from design to development to application,” Hinton said. “It played a huge role in our country’s history, and we are extremely lucky to have it.”

Today, you can see “23 Skidoo” at the Planes of Fame Museum in Chino, California or at select upcoming air shows with the Air Force Heritage Flight Foundation. 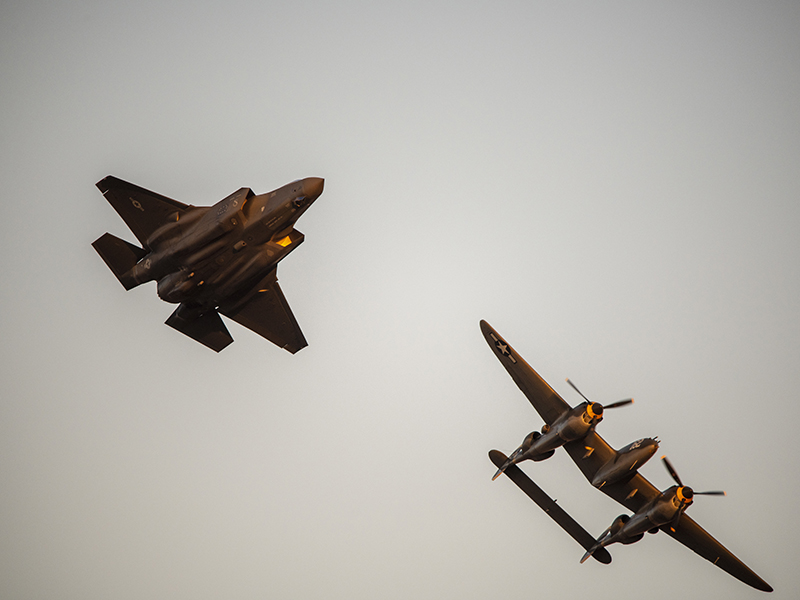