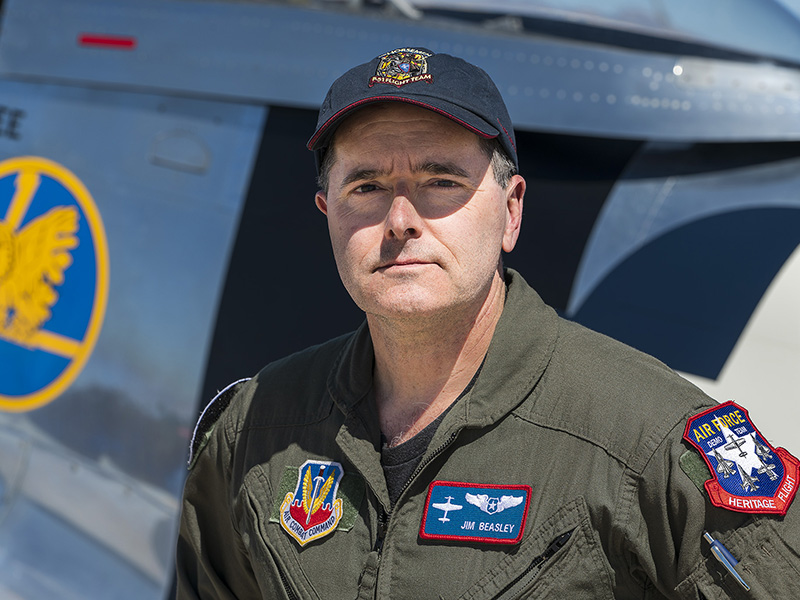 As a founding member of the Air Force Heritage Flight Program, Jim Beasley, Jr. has been flying historic fighter aircraft for over 20 years and has flown in hundreds of Heritage Flights across the United States, Canada and the U.K. He has accumulated thousands of flight hours in vintage military aircraft such as the P-51 Mustang and F4U Corsair and was voted “Civilian Heritage Flight Pilot of the Year” in 2006.

Having flown in airshows since the early 1990s, Beasley maintains commercial and multi-engine instrument ratings and holds a surface-level aerobatic waiver for solo and formation aerobatics in a multitude of piston-powered fighter aircraft. Beasley is an attorney and trial lawyer based in Philadelphia, Pennsylvania and runs The Beasley Firm, LLC, a complex litigation law firm.

We caught up with Jim as he prepares to showcase the legendary P-51 Mustang later this month at the Dayton Air Show alongside the U.S. Air Force’s premiere fighter and attack aircraft.

Q: What spurred you to launch the Air Force Heritage Flight program?

A: It was kind of a process. It started in the early 1990s with Ed Shipley when we were trying to get an F-15 ride. We had been flying airshows with another formation aerobatic team, so we got to know a bunch of military guys, and we ended up meeting a lot of the people who were decision-makers, people who had rank. We went out with some of the guys from McEntire Joint National Guard Base in South Carolina to unofficially practice some flights, just to see if we could do them, and it really kicked off in 1997 with the 50th anniversary of the Air Force. We finally got our F-15 ride, by the way.

Q: What originally sparked your passion for flying? Do you remember your very first flight?

A: My dad flew. He had a Cessna at first, and then he ended up having a twin-engine airplane. We had a home in New Jersey, and we were near an airport, so we would fly down there. I didn’t really think too much of it, but I always built models and I was always enamored with the P-51 Mustang, and there were two of them for sale in Cape May in 1976. I was eight years old at the time, but I kept telling my Dad, “you gotta get it, you gotta get it.” He didn’t do it. Then, we were flying across the country in his Aerostar and I persuaded him to take a left to go down to Texas to see the Confederate Air Force, and there was a Mustang there that was for sale. The registration number actually had his initials – 51JB – and even though I was only 10 years old at the time, I persuaded him to buy it, so he got it. That’s kind of what started it for me, and it’s the same plane I have today.

Q: What are some of the most difficult formations or missions you’ve flown?

A: We flew on a formation aerobatic team called the Six of Diamonds in the SNJ or T-6, and anyone who wants to do warbird formation aerobatics needs to learn to do it in the SNJ or the T-6 because it’s relatively underpowered so it requires a lot of technique. The rolling maneuvers are obviously the most difficult, the barrel roll formations, so you just to try to keep it smooth and consistent and have the planes look proper. That’s a challenging one. As far as Heritage goes, the most challenging ones are dealing with older airplanes like the F-4 because they require speed. We can certainly give them the speed they need, but with the dissimilar formations there, you just have to be very mindful of the plane’s limitations.

Q: You have already logged thousands of flight hours in various aircraft from the P-51 Mustang to the Supermarine Spitfire to the F4U Corsair. What’s your favorite aircraft to fly?

Q: If you could fly one of the modern fighters, which one would it be and why?

Q: You are the proud owner of several aircraft including a P-51 Mustang “Bald Eagle,” a TBM850 and a T-6. What makes Bald Eagle such a special plane? Why did you settle on this particular design?

A: The Bald Eagle is a part of the family. It has my initials and my dad’s initials in the registration number, 51JB. I’ve been flying that airplane since 1990 or 1991. It’s been decades and decades of tweaking that particular machine, so it fits me. It’s like sliding into a really comfortable pair of pajamas. That’s why it’s so special – I’ve just become one with it. I still enjoy flying other ones, but that one’s just different.

Q: You are also the proud owner of a large collection of motorcycles. Do you find any similarities between driving or racing motorcycles and flying historic aircraft?

A: In my view, it’s the same mindset. This might be a weird analogy, but I look at flying or racing motorcycles as a meditative process. When you’re flying in an airshow, you have to be precise and focus on the one thing you’re doing. It becomes a very calming experience. It can be hard and rough, and remarkably physical, but you’re thinking about just the one thing because if you’re distracted you can get killed. Racing motorcycles is very similar.

Q: You have flown in Heritage Flights both at home in the U.S. as well as internationally in Canada and the U.K. Are there any notable differences in flying here versus abroad?

A: In practice, not really. You do the same thing over and over again, so from an operational perspective it’s all the same. The difference, not so much with Canada but really the U.K., is with the people and the culture. In the U.K. everyone knows what a Spitfire is. With Queen Elizabeth’s Jubilee they had a memorial flight with, among other vintage aircraft, Spitfires. Flyovers are a big part of their existence. People in England just naturally know about these aircraft and their history, largely because they were so close, and the U.S. is just slightly more removed from World War II history.

Q: What’s the best advice you’ve received that you’d like to pass along to aspiring aviators?

A: Don’t allow technological advances in these new planes to take away from your piloting skill. Learn to fly in an old Piper Cub, for example. You need to learn to be precise and fly right, and you have to know the airplane and learn proper technique. Learn that basic stuff. Learn how to be one with the airplane as opposed to setting auto-throttles and just going.

Q: What does it mean to you to have been one of the founding members of the Air Force Heritage Flight program?

A: I think I’m the last one. Privilege is an understatement to be able to operate with the Air Force. We were very fortunate to have had close friends in the military that were able to appreciate what we were trying to do. It’s continued because it gives the public an appreciation of the stability of the Air Force and the progression of technology in these various aircraft. It’s a privilege to be a part of the program, and the fact that the Air Force has allowed me to do it since 1996 is very special. It’s something I make a point of always appreciating and always being ready to do what I can to live up to what they’re expecting of us. 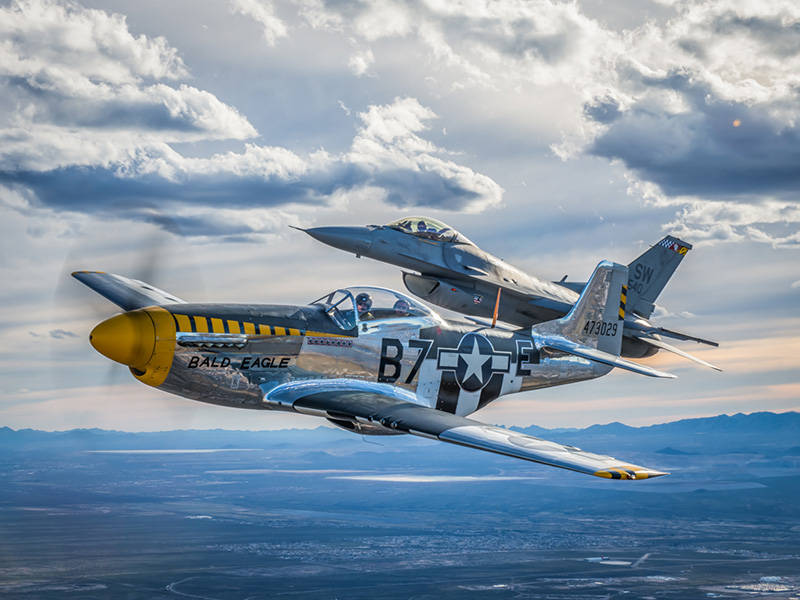