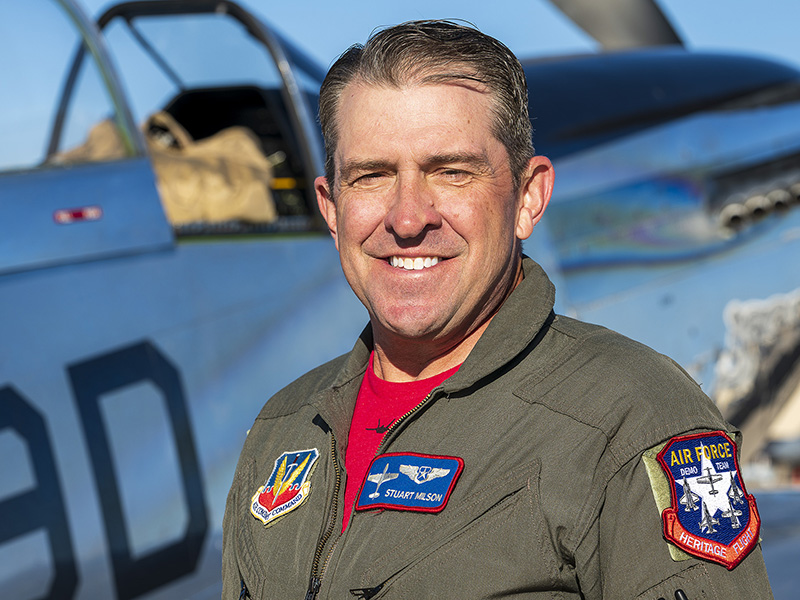 After taking his first ride in a de Havilland Beaver at the age of 10, Stuart Milson knew it was his destiny to become a pilot. Since then, he has pursued his love of flying by logging over 12,000 hours in two dozen different tail-wheel aircraft.

Born in Dallas, Texas in 1967, Milson is qualified to fly nearly 20 different aircraft from an EMB 120 to the MD-11 and Hawker Sea Fury. He is a certified flight instructor (CFII and MEI), flight engineer and an A&P mechanic. With a passion for historic warbirds attributed to his father’s career in the Navy, Milson is the chief pilot for the Cavanaugh Flight Museum in Addison, Texas, and has also been a member of the U.S. Navy Legacy Flight program since 2007.

Milson is currently employed with FedEx as a pilot on the MD-11 and resides at a residential airpark in Midlothian, Texas with his wife Cara and their three sons.

As he suits up for his fifth year as a member of the Air Force Heritage Flight Team, we caught up with Stuart to discuss his storied career and longstanding passion for aviation.

Q: How did you first learn about the Air Force Heritage Flight Team and what led to your decision to join?

A: Anyone who follows warbirds knows about the Heritage Flight program. It’s the premier team to be on, and really, I was just at the right place at the right time. They needed a pilot and I know a bunch of guys on the team. Tom “Gumby” Gregory is the reason I’m here – he and I have flown together a lot over the years, and he recommended me.

Q: Can you walk us through some of the more unique aspects of your Heritage Flight training?

A: The biggest thing is that we’re the only ones authorized to fly off the wing of the modern fighter. It’s very, very difficult for both parties to do, and it’s just really unique. I do the same profiles with the Navy and it’s a big deal, especially to fly next to some of the bigger platforms like the F-22. You’ve really got to be on your game to fly on those airplanes.

Q: It looks like you fell in love with flying at a very young age. Do you remember a specific moment that sparked your passion for flying?

A: I was always interested and flew remote-controlled airplanes when I was little. No one in my family was in aviation, but it’s just something I always had a passion for. Then, when I was about 10 or 11, we took a family fishing trip to Canada. I remember the float planes picking up the fisherman in the morning and returning the canoes and gear at night, and they had room, so they’d let me tag along with them. I was hooked after that. I got my flying license during my junior year of high school.

Q: You have already logged more than 12,000 flight hours in various aircraft from the EMB-120 to the DHC-4 Caribou to the F8F Bearcat. What’s your favorite aircraft to fly?

A: The Bearcat and the Sea Fury are the last of the big piston fighters, so performance-wise, those are great airplanes, but for me it depends on the mission. I like to fly and am lucky to get to fly different airplanes. If I’m in a P-40 or a Skyraider, I think it gives the public a different look. We get some really unique formations that are really cool. Unless they see the P-40 and Skyraider at Oshkosh, or go to Chino or airshows, they don’t get the same experience.

A: F-86. Supposedly it’s going to happen in the next couple of months, but that’s one I definitely want to fly. P-38 would also be cool, but F-86 is the one on my mind right now.

Q: You are the proud owner of a Harvard Mark 4/T-6. What’s unique or special about flying this particular aircraft?

A: The T-6 is how you get the time to be able to fly a Mustang or something else, so it’s just kind of a building block you have to do. My son Jack has his license and will be starting his T-6 training soon, and uniquely, Tom “Gumby” Gregory is the one that did his private pilot check ride. That was a special day to have a former Heritage Flight pilot and get to teach the next generation of fliers. The special thing about the T-6 or any of these airplanes is sharing it with others and inspiring the next generation of pilots to fly.

Q: You are also involved in the U.S. Navy Legacy Flight program and the chief pilot for the Cavanaugh Flight Museum. Did something in particular spark your passion for historic aircraft and warbirds?

A: Again, it’s being at the right place at the right time. It’s very difficult to get into flying fighters. I live on an airport and one of my neighbors flew the Commemorative Air Force Corsair, and he got me in on that, which is how it all started. I then got into the Navy legacy program, and my dad was in the Navy, so it was a tribute to him. I started flying with “Gumby” and “Tuna” down at the Lone Star Flight Museum in Galveston, and it’s just the way the doors opened so I got a lot of experience flying.

Q: From piloting to flight instruction, to engineering and mechanics, you are passionate about and involved with flying through every step of the process. What do you find to be most challenging?

A: That’s a hard question. Just being an airshow pilot is challenging to keep up with formations, as it’s a lot to keep up with at the level of activity we do. The multiple ships with dissimilar formations is probably the most challenging skill-wise, especially if you’re on the wing in some of these venues.

Q: You have flown aircraft in television and movies, including the CBS series “Zoo” and the motion picture “Get On Up.” How does that compare to Heritage Flight missions?

A: It's a totally different ballgame – movies are a whole different ball of wax. You do have craft services which is nice, so you get taken care of. I’ve been on movie sets a bunch, and it’s just totally different. It could be a lot of sitting around, but it’s fun to have had that experience. There’s multiple takes so you can get the shot, which can result in a lot of long days, or hurrying up and waiting for the producers.

Q: Any notable personal anecdotes you can share about your most memorable flight experience?

A: I was lucky enough to be in the Indy 500 flyover in the P-40, so that was pretty special. The Air Force sponsored one of the Indy cars, and it had the iconic shark’s mouth on the side of the car. We got a police escort to the venue, and Kelly Clarkson was coming back from singing the national anthem as we were landing, so it’s fun to be part of stuff like that.

Q: What does it mean to you to join the Heritage Flight program as one of the few civilians certified to fly these historic aircraft?

A: It’s an honor to fly next to the person in the jet beside you, not just the jet. It’s a huge humbling experience. It’s just being around everybody, and the friends I’ve made with the demo teams. A couple of years ago, I had all four teams in my house, as they had invited themselves for dinner. I told my wife, “Hey, we’re going to have 12 people for dinner here in a couple of hours,” and it was really cool to host them all by happenstance. The flying is awesome, but it really comes down to the people we’re privileged to fly with. 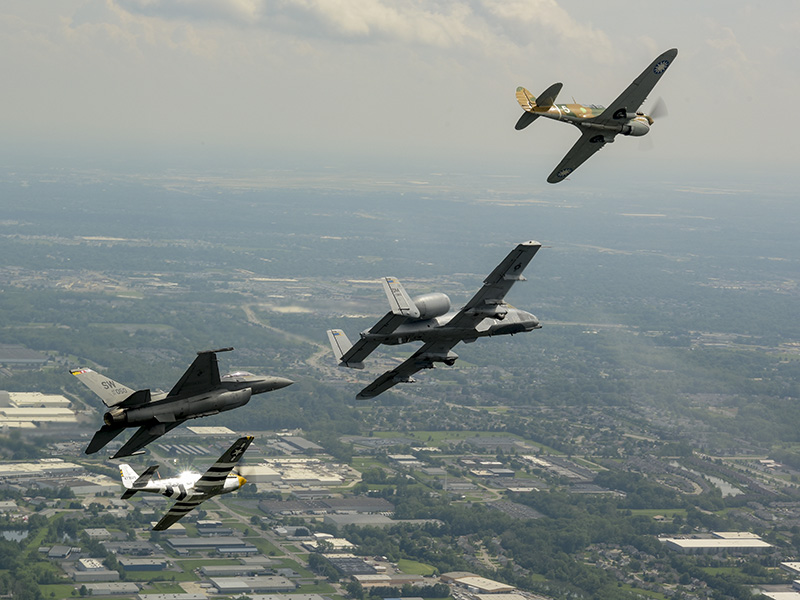 A P-40 Warhawk piloted by Stuart Milson flies alongside a P-51 Mustang, F-16C Fighting Falcon and A-10C Thunderbolt II May 25, 2019 ahead of a flyover of the Indianapolis 500. (U.S. Air Force photo by Staff Sgt. Betty R. Chevalier) 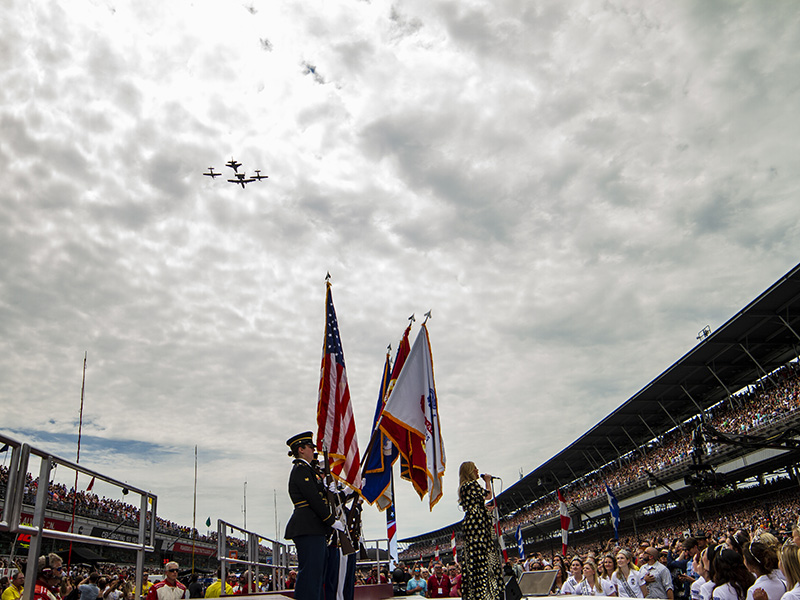