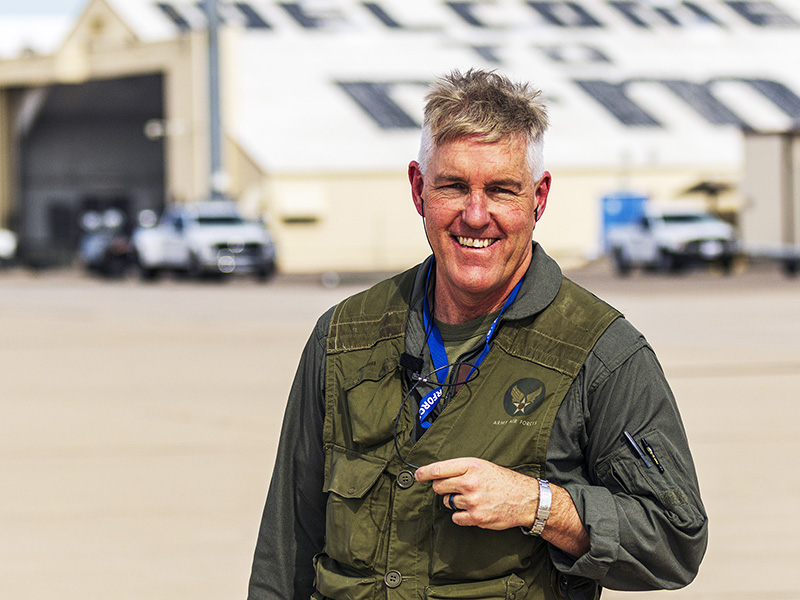 Born in San Antonio, Texas, Bruce “Doc” Winter spent his formative years in Colorado, California, and Texas.  From a very young age he knew he loved flying and wanted to serve his country as a fighter pilot in the U.S. Military.

After obtaining a medical degree from Baylor College of Medicine in Houston, Winter joined the Navy in 1988 as an Aviation Officer Candidate.  He completed flight training in 1992 and earned his first choice of jets, selecting the F/A-18A Hornet. While serving, “Doc” accumulated over 1,300 hours of flight time and 211 carrier arrested landings at sea, plus 25 OSW combat missions during a WestPac Cruise to the Persian Gulf. Bruce also served as an F/A-18 Hornet Exchange Instructor pilot with the Marine Corps in El Toro, CA followed by Miramar, CA.

Winter currently resides in San Antonio with his wife and children where he practices Ophthalmology and is grateful to fly as often as he can.

“Doc” has flown numerous aircraft and tallied over 4,000 hours in the sky including more than 800 in the P-51 Mustang. He is proud to fly the P-51D “Happy Jack’s Go-Buggy” as the newest member of the Air Force Heritage Flight Team.  We caught up with “Doc” as he prepares to showcase this historic aircraft alongside the U.S. Air Force’s premier fighter and attack aircraft.

Q. Do you have a specific moment that sparked your passion for flying? Do you remember your very first flight?

A. It really all came to fruition when I was young teenager. I had been introduced to Air Force Magazine, which came to our house all the time because my father was a retired Air Force officer who served as a flight surgeon in the USAF. They would send him Air Force Magazine every month and I would thumb through it and say, “this is just the best thing in the entire world!” I was young at the time, but that was the moment that sparked my interest in flying.

Q. You have already logged more than 4,000 flight hours in various aircraft from the P-51 to the F/A-18 Hornet. What’s your favorite aircraft to fly?

A. Anytime you can go flying it’s a great feeling. I really like to fly just about anything; although I do admit I love speed and like to fly fast. The F/A-18 Hornet was a beautiful fighter to fly because it was quite quick and very capable at its tactical job. I found the P-51 Mustang also to be a remarkably well-flying, fast airplane for being more than 75 years old.

Q. You have owned a decorated WWII warbird - “Happy Jack’s Go Buggy” - for nearly two decades. What caused you to fall in love with these planes?

A. I'm sure this is a consensus amongst most aviation enthusiasts, but the P-51 Mustang is one of the most beautiful, elegant fighters that the world has ever seen or produced. It is famous for all sorts of great and recognizable reasons. Any pilot would rightfully trade places for the opportunity to jump in the backseat of a Mustang. It is arguably the most famous fighter aircraft and it deserves that accolade because it truly is a remarkable machine.

My wife was nice enough to treat me to a backseat ride in the Mustang down at Lee Lauderback’s place as birthday present. I flew it, and was just amazed at how this airplane could be more than 75 years old. I recalled thinking to myself, “no wonder all the 20-year-old kids would have given anything to have flown this back then.” Not only is its beauty and history so special, but it's a fun and fast airplane to fly.

Q. How do your aviation and military flight passions compare and contrast with your work in the medical field as an ophthalmologist?

A. I think, as with most professions, if you want to be good at it, you must dedicate a tremendous amount of time and effort to your craft. I’ve always loved this term from the Navy - “attention to detail” - and it’s true of lots of professions, but especially in the field of ophthalmology and operating in the surgery suites. Your attention to detail and ability to do many things at once, while keeping your mind engaged are critically important in the operating room. The same is true of flying. A common description of flying is “hours of boredom punctuated by moments of terror.” However, that's not the kind of flying I like to do. One of the things I love about military service flying is that it is mission and task-oriented, therefore, you're always thinking about the task at hand. Asking yourself: “What should come next, what could come next? What do you need to do now? How can you improve your position better to achieve mission success?”

Q. You will soon be certified to fly warbirds in the Heritage Flight Program alongside modern USAF aircraft after an already impressive military and medical career. What does joining this program mean to you?

A. It means a great deal. I think back to something that Steve Hinton Sr. and Lee Lauderback, two of the founding members of the Air Force Heritage Flight program, have always said: “we are flying National Treasures.” These warbirds from World War II, some of which are originals, are truly a piece of our nation’s history. I feel privileged to fly these planes and pass along that heritage to an airshow population. When you’re flying with modern aircraft right off your wing, it really puts a neat perspective on the lineage and the whole continuity from the 1940’s all the way through today. It really is an honor to be able to fly the P-51 Mustang in formation with the modern USAF fighter aircraft piloted by a young combat-ready pilot, to honor both the heritage of our WWII pilots and the young USAF pilots that get to be at the tip of the spear now.

Q. What are you most looking forward to as the newest member of the AFHFF program?

A. I’m proud to have been selected and to have the opportunity to serve as a good representative for the Air Force Heritage Flight program. I also hope to inspire the next generation to keep the tradition of proud military service to our country. I'm sure when a young boy or girl looks at a P-51 Mustang with modern USAF aircraft on their wing, it will be just as thrilling for them as it is still for me.