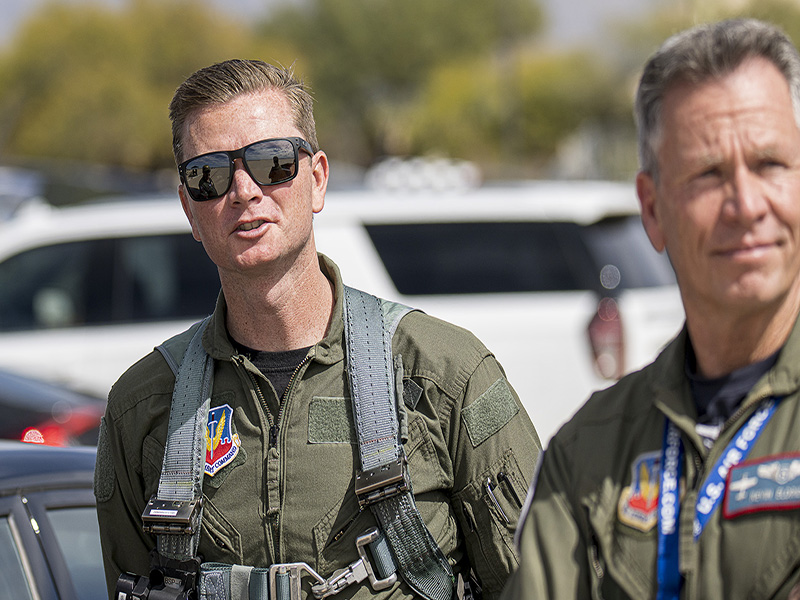 Born in Orange, CA in 1987, Steven Hinton is the son of Steve Hinton Sr. who has been a staple of the Heritage Flight program since its beginning 25 years ago. An accomplished pilot at an early age, he is a 7-time Reno Air Races Unlimited Gold Champion (2009-2014 and 2016) and currently holds the World Speed Record for Piston Powered Aircraft over 3km at 531MPH.

Steven is both single and multi-engine rated and has authorization to fly numerous aircraft, including the P-51, P-40, P-47, F6F, F8F, F4U, ME-109, Yak 3, Yak 9, Yak 11, and Spitfires. He has logged more than 2,000 hours in total flight time with 810 of those hours spent behind the stick of a P-51 Mustang. Hinton also holds an Airframe & Powerplant (A&P) License and Inspection Authorization License.  Steven currently serves as a board member for the Planes of Fame Museum, and he is part-owner of Fighter Rebuilders located in Chino, CA.

Following his father’s recent retirement from the program after leading the recent Super Bowl LVI flyover, we sat down with Steven as he embarks on his latest adventure to become one of the newest pilots representing the Air Force Heritage Flight Foundation for the 2022 season.

Q. Do you have a specific moment that sparked your passion for flying? Do you remember your very first flight?

A: I've been told that I had my first flight at 2 weeks old. I do remember flying and sitting on my dad's lap and not even being able to see above the dash. I was about 5 or 6 years old the first time I got a ride in a P-51 Mustang. We happened to be in a scenario where my dad needed to get back to Chino Airport for a time commitment, and we were an hour away by car or just 10 minutes away by flight. There weren't enough phone books in the world to prop me up to see out of the plane, but it was a thrill.

Q: You have already logged more than 2,000 flight hours in various aircraft from the P-51 to the P-47 to the Spitfire. What’s your favorite aircraft to fly?

A: It may not be the most unexpected answer, but it is hands down the P-51. There's just something about the aesthetics of a P-51. On the ground, they look phenomenal, and in the air, they look even better. The sound of them always gives me goosebumps. There's no better sound in the world, and every time you get into the cockpit of one (although they're all a little bit different), it feels like home. Aircraft are really built around the pilot for ease of operations, and the flying qualities of the P-51 Mustang are just tremendous. It's one of the best aircraft I've ever flown. Other aircraft like the Spitfire have a unique personality and they're very nostalgic. They are all fun to fly for various reasons, but I'd take a Mustang any day.

Q: Are there any aircraft still on your bucket list?

A: I have not yet been able to fly an F-86 Sabre, so that's definitely near the top of my list.

Q: You have dedicated much of your life to warbirds via Planes of Fame Museum and Fighter Rebuilders. What caused you to fall in love with these planes?

A: I think there's a tremendous respect that I have – and I know certainly a lot of individuals have – for what was accomplished during that era in such a short timeframe. Looking at the mechanical side of things, there are so many intricacies from the way cables are routed to how the mechanisms work, and when you look at all that today, you realize that none of that was designed with a computer. It was all done with a slide ruler, a piece of paper and a pencil. The P-51 Mustang was designed in 100 days. In today's world with all the technology we have, I’m not sure there are many that are designed and built in 100 days. I firmly believe we're privileged to still get to be able to enjoy these aircraft. To that end, I think it's really a testament to the product that North American Aviation built. I’m proud to be a part of preserving and restoring that heritage and legacy for future generations to enjoy and see firsthand at an airshow. It’s a reminder of the freedoms that we enjoy today. 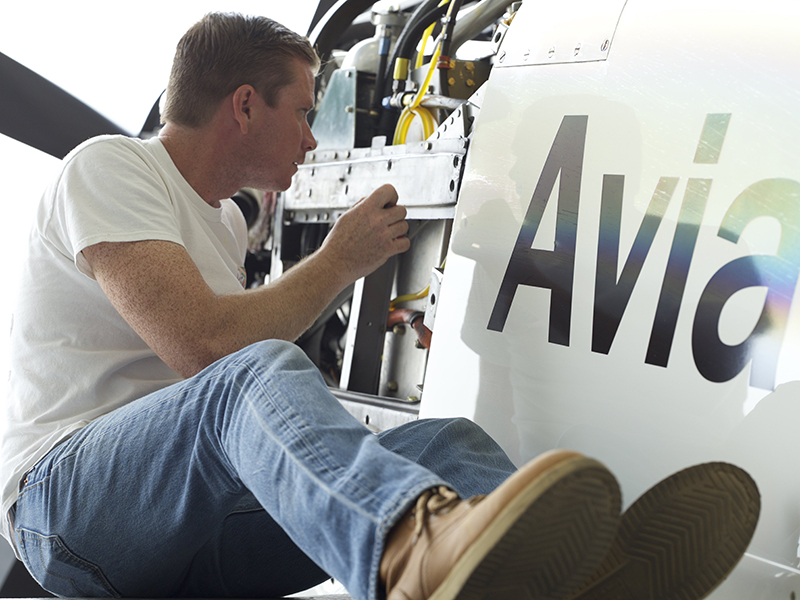 Q: What spurred you to get involved with restoration? Do you have a story about a favorite aircraft you’ve worked on?

A: Just last year we finished a Grumman F6F Hellcat, which was a Navy airplane that really turned the tide of the war in the Pacific Theater during World War II. Prior to the Hellcat, we were overmatched by the Japanese and didn't have adequate equipment to take the fight to them. So, the Hellcat came out, and it was a game changer. Just under 13,000 Hellcats were built during the war, and today there's only five flying. When we had the opportunity to restore a particular Hellcat that hadn't flown in over four years, the owners happened to have a close relationship with Donald McPherson, a former Hellcat Ace living in Nebraska. Long story short, we restored the aircraft and modeled its paint scheme after Don’s aircraft during World War II. I was then able to fly the aircraft back to Minnesota, but not before we made a stop in Don’s hometown in Nebraska. Roughly 500 people showed up, and it was a tremendous patriotic showing in support of Don to let him see a Hellcat fly for this first time since the war. Having the opportunity to restore the airplane itself was tremendous, but recreating Don's aircraft plus having a chance to meet him made it even more memorable.

Q: Which title or accolade are you most proud of? (e.g. World Speed Record holder, Reno Air Race Champion)

A: I tend to not look back on the accolades because I feel like I still have a lot of things yet to accomplish. Hopefully, 45 years from now I can sit on a front porch and look back on what I've done, but for the time being, the World Speed Record run was a heck of an effort. Personally, and amongst our team, we felt like we left a little bit on the table so we're actually in the middle of preparing for another World Speed Record run. It’s not on the top of my pyramid, but I am still hungry for that one. Having won Reno [Air Races] seven times, I still ‘keep marching on’ every year.

It's been an incredible adventure thus far, and the experiences I've had could last a lifetime. But I’m still hungry for the pursuit of accomplishing many more things and becoming a part of the Heritage Flight Team is one of those things. The ability to join this elite group is something I can hopefully be a part of for many years to come.

Q: What’s it been like watching your dad, Steve Hinton Sr., these past 25 years as part of the AFHFF program and how has that inspired you to become an accomplished pilot & restorer?

A: It was inspiring watching him through those years of flying with the Heritage Program and I enjoyed when he took me along to wipe down the airplanes and sit in the cockpit. From a father-son standpoint, his participation was a great demonstration of selflessness and giving back to the community. There's a lot of preparation and training and commitment that goes into being a part of the Heritage Flight Team, and the reward is found in the sense of giving back. I didn’t realize it at the time, but watching it progress and being able to go to airshows with him reaffirmed that passion. Being able to meet so many high caliber Air Force pilots and personnel at such a young age allowed me to be surrounded by positive influences in my life. Looking back on that now, it really did have a big impact on my upbringing and shaped who I am today.

Q: You will soon become one of the few civilians certified to fly with the Heritage Flight program after an already impressive career. What does joining this program mean to you?

A: Words simply don't do it justice. It's really something personal and having an opportunity to tell the stories to the next generation of potential service members is quite the privilege. It's such an important tradition and heritage that our country has, and we need to continue to tell those stories. It really is an honor I can't express in words, being part of a very small group of civilians that are entrusted to fly alongside modern-day military aircraft. Our military pilots are the best in the world, so having the opportunity to fly alongside these pilots that are the cream of the crop as far as airmanship and flying abilities go, is something I'm really looking forward to. 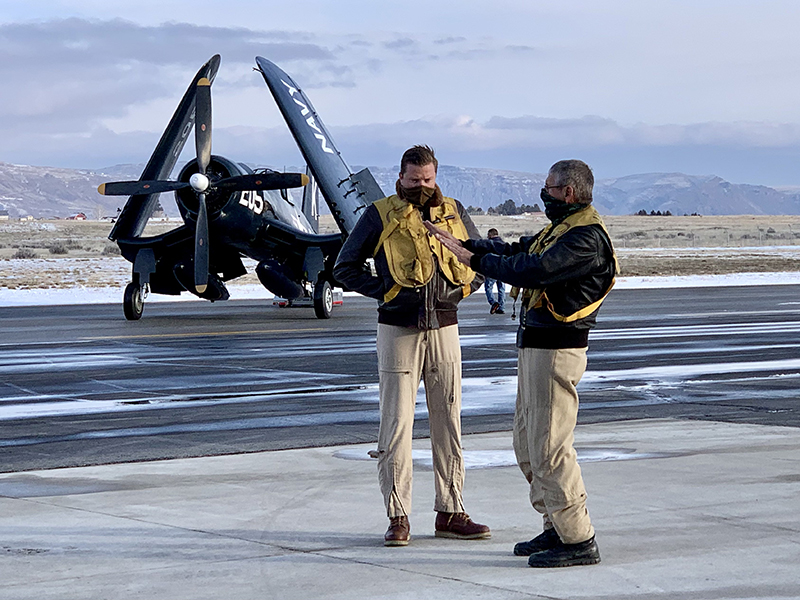