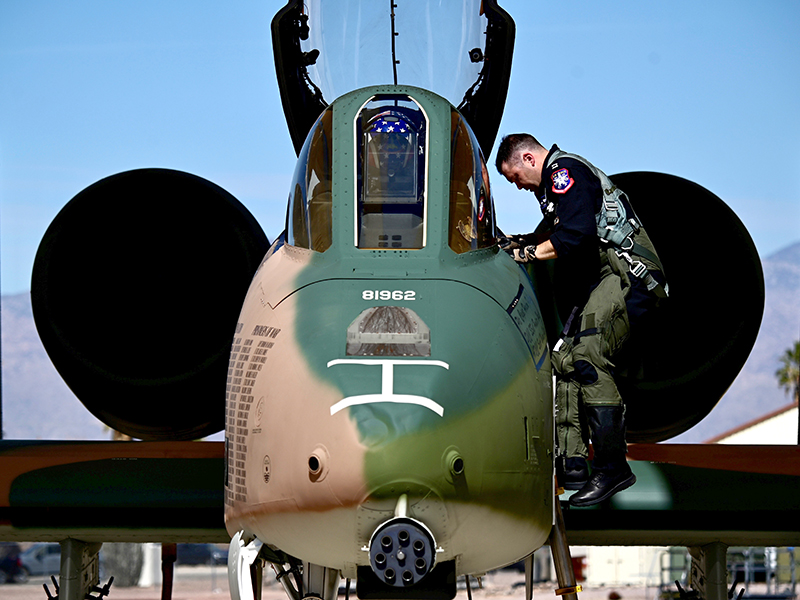 Capt. Haden “Gator” Fullam will be leading a team of 10 Airmen, who will narrate, supervise and maintain the aircraft for the 2021 and 2022 airshow seasons. As the certified demonstration pilot, he will perform aerial maneuvers and showcase the combat capabilities of the A-10 and the Airmen who maintain it. Fullam will also perform heritage fights with Air Force aircraft from past generations, paying tribute to those who paved the way for Airmen that serve today.

“It’s an honor and privilege to be command this group of Airmen,” Fullam said. “The work the team does day-in and day-out is remarkable and shows the dedication and commitment we have to our mission, each other and everyone who attends the shows.”

Before being named the team commander, he was an A-10 instructor pilot assigned to the 354th Fighter Squadron at Davis-Monthan. He is an experienced combat pilot with more than 1,500 flying hours.

Fullam is from Rising Fawn, Georgia, and is a graduate of the University of Tennessee. He joined the Air Force to pay tribute to his grandfathers, both Vietnam War veterans.

On Feb. 26, the team unveiled a new Vietnam War-era paint scheme for the demonstration jet in honor of the 97 Airmen assigned to the 355th Tactical Fighter Wing, who either made the ultimate sacrifice of losing their lives during that conflict or became prisoners of war. Their names have been inscribed on the side of the aircraft, so that they will always be remembered.

“The opportunity to fly an aircraft with a Vietnam War-era paint scheme is one I never thought I would have,” Fullam said. “Every time I fly that aircraft it will have a special meaning to me, so giving the best and safest demonstrations at airshows is without question my priority. What is going to make that happen is the experience and professionalism we have as a team.”

He replaces Maj. Cody “ShIV” Wilton, who stood the team back up in 2018 after a six-year hiatus.

“Gator is the perfect pilot to be leading the team because he embodies the attack pilot mentality prevalent in our community,” Wilton said. “He will ensure the team continues to progress and over-deliver on our promise to recruit, retain and inspire the next generation of Airmen, and I am excited for the future of the team under his leadership.”

This article originally appeared on dm.af.mil.