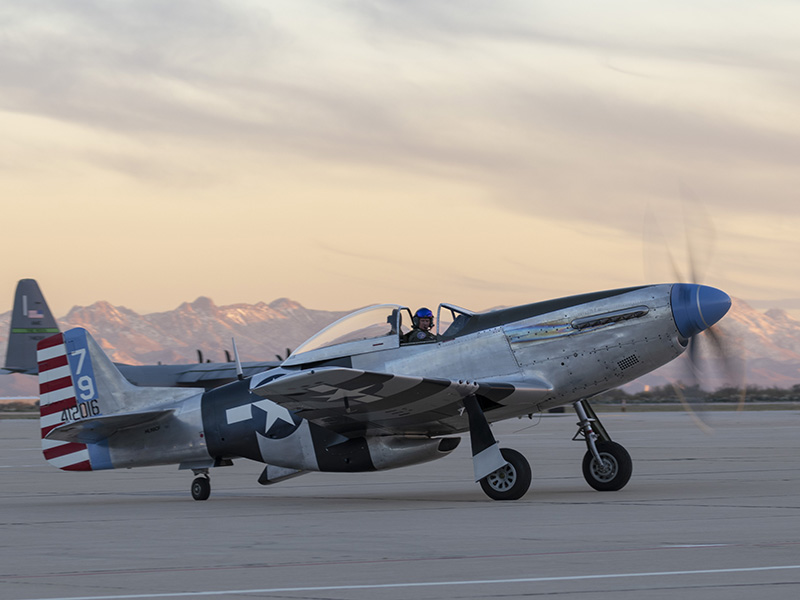 Tommy Williams started flying when he was 16 years old in Houston, Texas before attending Embry-Riddle Aeronautical University in Prescott, Arizona. While at Embry-Riddle, he participated in Air Force ROTC and after graduation was commissioned a second lieutenant in the Air Force. While in the Air Force, Tommy flew multiple fighter aircraft, including the F-15C, F-5E, F-4E and F-16 and acquired over 3,800 hours of fighter time.

After serving on active duty he entered the Air Force Reserve. He recently retired as a Major General, serving in support of the USAF Director of Operations at Headquarters Air Force in the Pentagon. When not supporting the Heritage Flight Foundation, Tommy serves as a captain for Delta Airlines on the Airbus A-320 based in Minneapolis, Minnesota.

A: It’s something that I’ve always had. Even as a little boy it was always there. I was building models and going after any kind of airplane toy. I remember my grandparents had encyclopedias and they had a whole section on military aircraft that I would read during the summer.

When I was 10, I saw an air show for the first time and the Thunderbirds were part of it. Everybody was looking forward and that great big, six-ship, low-altitude F-4 formation came from behind us and it was a spiritual event almost.

A: I grew up with a single mother and we didn’t really have anything. My mindset was never, “I’m going to go be an Air Force fighter pilot.” It was always, “Geez, that’s something I would like to do and probably never will,” just because there was never any example of it. I was motivated enough when I got into high school to I take all the money that I made sacking groceries and put it towards one hour of flight instruction when I was 15 years old so that by the time I was 16 I could solo.

Still, all that I had ever read about military aviation, and especially flying fighters, was that even to get to pilot training was super competitive and you had to be captain of the football team, have a 3.5 GPA, do hours and hours of community service and be an Eagle Scout. I did pretty well in school and I played sports but I was not at that level, and I just didn’t think it was really an option.

When I got to college in 1979, I remember seeing an advertisement in the library for Air Force ROTC. When I got into ROTC I realized that, quite frankly, I don’t know if there was any more highly motivated kid to do it than me. Even though I maybe wasn’t the smartest guy in the room, I was certainly the most motivated, and I think that helped considerably.

A: The F-15 Eagle and F-16. I flew the F-16 a lot longer, but the F-15 is what I flew first. It was the one that I wanted to fly initially, but both of those airplanes were just incredible pieces of machinery.

The F-16 is like a sports car. It’s very light for a fighter, it’s single-engine and it’s small. The configuration of the cockpit is such that it’s very form-fitting with that reclined seat and the big bubble canopy that you’re perched up in. You could say it’s the closest thing to really feeling like you’re flying. You don’t really sit in the cockpit like you do in most airplanes; in the F-16 it’s like you’re perched on it.

The F-15 was a lot bigger and a lot more powerful. Just the mass of the F-15 and the massive thrust of the twin engines meant it could fly higher and faster than the F-16 and carry a bigger weapons load. Going Mach 2 in an F-15 was pretty unique and you can’t do it an F-16.

With the F-16, it was like when you buy that super high-performance car but you get none of the extras. The F-15 was loaded.

A: One of my jobs when I was with the Air Force and working for Air Combat Command was to oversee the demo teams and the Heritage Flights, so that’s how I ended up meeting all the guys in the Heritage Flight Foundation. After a few years with ACC I got another assignment and that took me out of that chain of command so I was eligible, and it would be appropriate, for me to fly on the civilian side. Within a year or two after I left that position with ACC I was brought on board as one of the Heritage Flight pilots.

The P-51 is just so iconic. It arguably significantly improved the ability for our country to execute and bring WWII to a conclusion. It’s a fighter that is just so special and unique and it played such an important part of our history. To be able to fly it and to see how those who came before me operated is just revealing.

The Mustang is a super high-performance, piston-driven airplane and that brings a lot of challenges that us jet guys haven’t had to deal with, so that’s kind of cool to be able to develop the skill set to meet those challenges.

The Sabre is almost as iconic as the Mustang in many ways. Without the Sabre during the Korean War, things would have been a lot different in the air. It was the airplane that really brought into the jet age the capabilities that the Mustang had in the propeller age. The Sabre is sublime compared to a Mustang. Everything is smoother, everything is faster, everything is easier and it’s a lot more capable.

The P-51, F-86, F-15, F-16 – there are not many people who would say those are not some of the premier air-to-air fighters on earth. To be able to experience each one of those is incredible.

A: It’s all about speed and maneuverability, and of course the older warbirds don’t go that fast. The good news is with our modern fighters like the F-22, F-16, F-35 and the A-10, these airplanes all fly really well with ours because their flight control systems are so sophisticated. But still, if you’re at 300 feet on the low side of an arching path and you’re in an F-22, you’re pretty close to the ground and you’re putting a lot of trust in the guy in that Mustang. There are real challenges and that’s why we spend a week at Davis-Monthan every year going through this program.

An F-15, an F-16, any of our modern fighters, they have so much more capability and safety. There are no real dark corners of the flight envelope so it’s not going to bite you. A Mustang can bite you.

Q: What’s it like to fly alongside the F-16, which you flew in the military?

A: It’s certainly cool to look over there and see a Viper on your wing and think back on what it was like flying that airplane and doing all of those things. I hope that someday those guys are where I am. I hope that they will pursue this kind of thing and develop new skill sets to be a P-51 pilot or an F-86 pilot. Hopefully, someday they’ll be flying that Mustang looking over at that young man or young woman in the F-35 or F-22. I want them to be part of it.

A: The F-22, for the same reason I liked the F-15 when I started – it’s the hottest thing out there. It’s the most high-performance aircraft on earth. To have an opportunity to be in command of a fighter like that is something I’ve always been attracted to. The faster and more capable it is, the more likely I want to be a part of it. It just does things that an airplane shouldn’t do and it does it well and predictably.

A: Robin Olds. He was anything but a traditional Air Force officer. He was kind of like what we all want to be. He was an awesome aviator, yet he was a bit of a renegade and he challenged authority. He was so politically incorrect but he was correct most of the time. It’s the perfect fighter mentality. 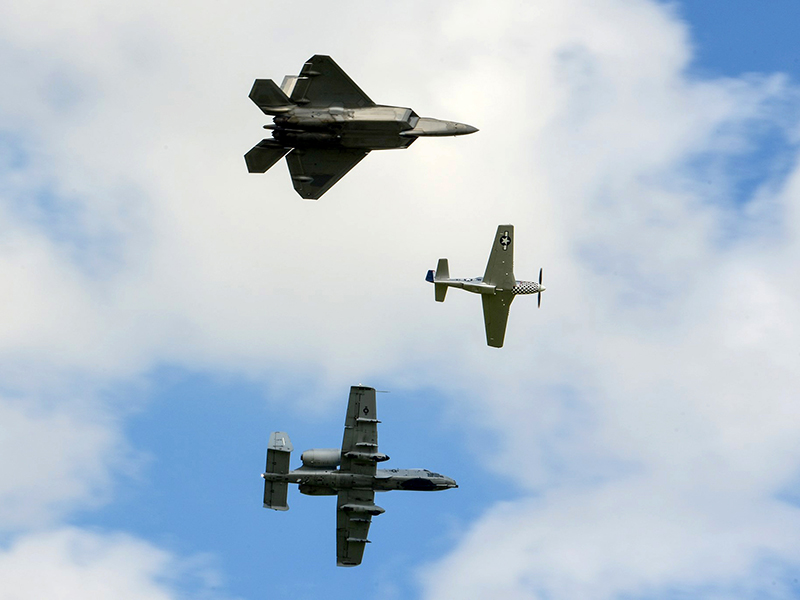 Tommy Williams flies a P-51 Mustang alongside an A-10 and F-22 during the Wings Over Whiteman air show. (Photo by A-10 Demo Team) 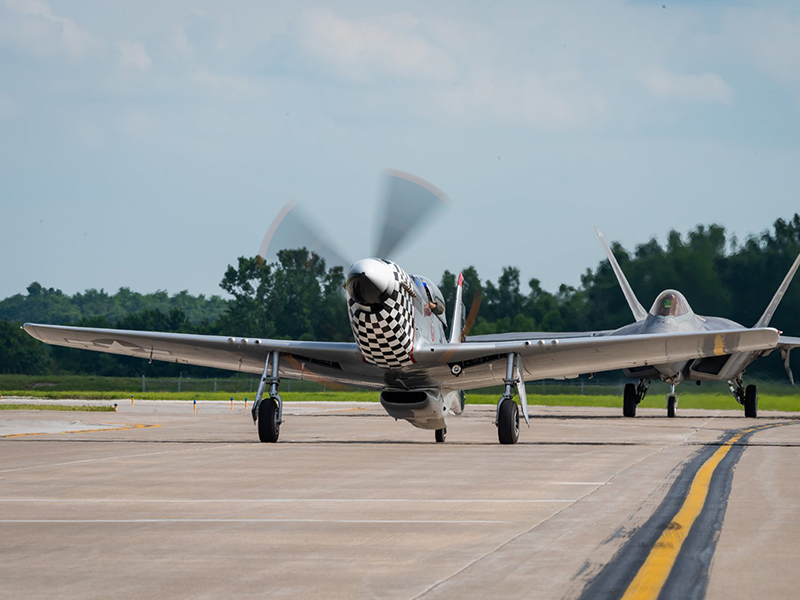 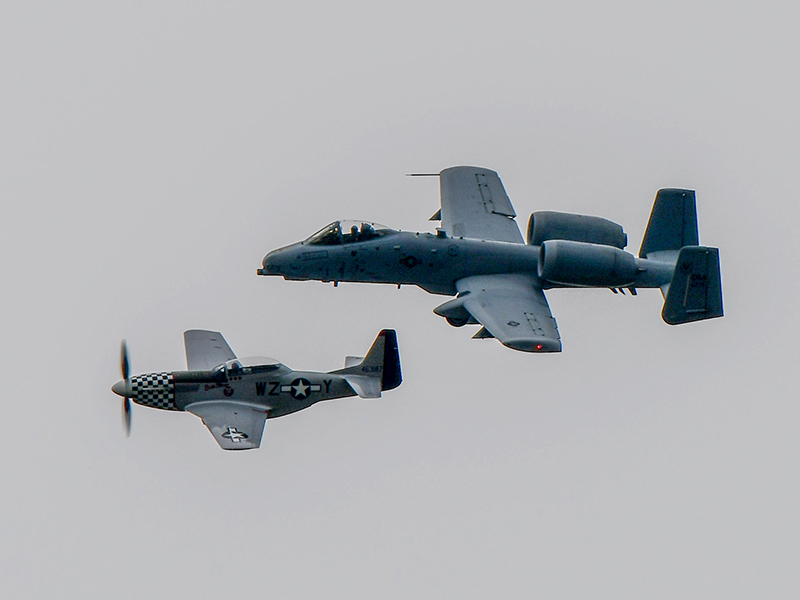