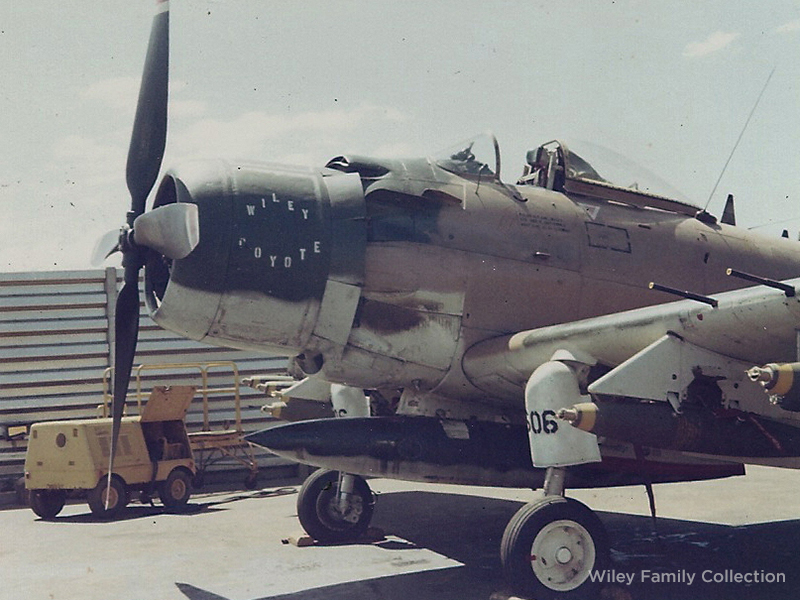 With aircraft like the F-4, B-52, and SR-71 patrolling the skies, the United States Air Force was well into the jet age by the time of the Vietnam War. However, propeller-driven A-1 Skyraiders were still called on to perform some of the war’s most dangerous jobs.

Wiley Coyote, an A-1H Skyraider (AF Serial No. 52-139606) owned by the Cavanaugh Flight Museum in Addison, Texas, served in the Air Force’s 6th Special Operation Squadron. During 1968 and 1969, the aircraft was based out of Pleiku and Da Nang, South Vietnam. Using the call sign SPAD, the primary mission of the Skyraiders of the 6th SOS was to support the Studies and Observations Group – an elite joint special operations unit.

The SOG teams took on highly-sensitive missions including reconnaissance, sabotage, personnel recovery, psychological operations and counter-intelligence and often operated deep behind enemy lines, according to an Army article marking the 55th anniversary of the unit. Attack aircraft like the A-1 helped watch over the SOG teams and provided close air support for immediate extraction if required.

“They would escort the helicopters in, cover their insertion, and then the team could be on the ground for days,” said Ken Holston, a retired Air Force C-130 pilot and current Skyraider pilot with the museum. “Whenever a team was in trouble they would call for the SPADs to come in to protect them. While the Green Berets’ goal was to stay undiscovered during these missions, that didn’t always work out.”

Skyraider squadrons engaged in a wide variety of missions during Vietnam, but they were best known for the search and rescue operations that typically occurred over dangerous territory. The tough A-1 could operate while exposed to heavy enemy fire and provide cover for more vulnerable helicopters as they went in to extract pilots whose faster, more capable aircraft may have just been downed in the same area. 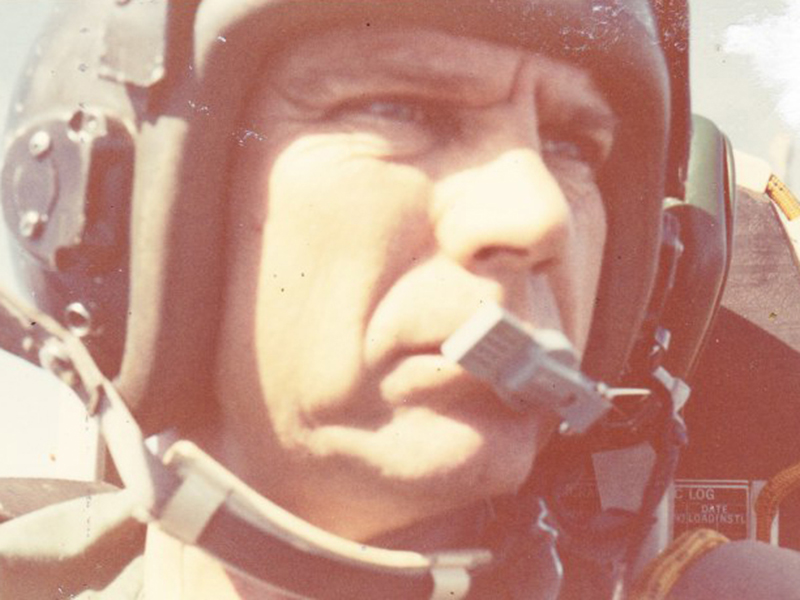 During its time with the 6th SOS, Wiley Coyote was piloted by Lt. Col. Dan Wiley, a seasoned airman who got his start in the cockpit of P-51s and P-38s during WWII. Following the war, Wiley served as a performance instructor and test pilot at Edwards Air Force Base and Wright Paterson Air Force Base. During this time, he helped develop some of the most advanced aircraft of the day, including the F-94 Starfire, F-104 Starfighter, F-105 Thunderchief and F-106 Delta Dart. He also holds the distinction of being the first USAF pilot to test fly-by-wire controls, according to his family.

Wiley’s service at the Air Force’s testing grounds also put him at the heart of the space race. He served as a program manager for the X-15 program, which contributed to the development of the Mercury, Gemini and Apollo missions. He also worked alongside many of the legendary “Right Stuff” pilots who would define the early days of space travel like Chuck Yeager, Gus Grissom and Ed White.

While Wiley operated on the cutting edge of aviation technology as a test pilot, when he returned to combat it was in a much older aircraft – the A-1 Skyraider.

Skyraider 139606 first entered service with the U.S. Navy in 1955 and served on the aircraft carriers USS Bon Homme Richard, USS Ranger, USS Oriskany, USS Coral Sea and USS Intrepid. It was transferred to Davis Monthan AFB in late 1967 and was assigned to the 6th SOS. After a brief time with the Air Force’s 22nd SOS, Wiley Coyote was transferred to the South Vietnamese air force in 1970 and would serve faithfully there until the end of the war.

Of the hundreds of Skyraiders that served in Southeast Asia, only a few made it back to the United States. Wiley Coyote was one of a handful that were used by South Vietnamese pilots to escape the country after the fall of Saigon in 1975. It was returned to the United States in 1980 along with three other A-1s.

“A lot of time and effort went into pulling four surviving Skyraiders out of Thailand and returning them to the U.S., but once they got to the U.S. they initially sat abandoned,” Holston said.

Wiley Coyote eventually landed in the hands of the Santa Monica Museum of Flying. When the museum initially dissolved in 2002 (it reopened in 2012), the aircraft was sold to a private collector who had experience as a U.S. Navy Skyraider pilot. He restored the aircraft and flew it for several years in a Navy color scheme. Cavanaugh acquired it in 2016 after his passing.

Because the previous owner had kept the plane in flying condition, Wiley Coyote has been more of a preservation project than a pure restoration for the Cavanaugh Flight Museum, Holston said. In the spring of 2018, Delta Air Lines and PPG Aerospace sponsored a repainting to its 1968 colors, to celebrate the 50th anniversary of its start of Air Force service.

Since acquiring it, the museum has worked to match every detail of its 1968 markings, including antennas unique to a Vietnam SPAD.

“We felt strongly that we should honor its service with the 6th SOS,” Holston said. “When I climb up on that airplane I stop and think, what parts here are definitely original - the canopy rails, the fuselage hand grips, the stuff that doesn’t get changed out. I’m touching history.”

The Douglas Aircraft Company delivered the first A-1 Skyraider in 1946 and produced 3,180 of the planes in seven main variants over the next 12 years. The A-1 was slower than the jets that were utilized during Vietnam, but could remain over the battlefield for longer periods of time and provide pin-point air cover for troops. It was also heavily armed with four 20 mm cannons with the ability to carry over 12,000 pounds of combined fuel and ordnance.

The historic image of Wiley Coyote at the top of this article and photo of Lt. Col. Dan Wiley were provided by the Wiley family. 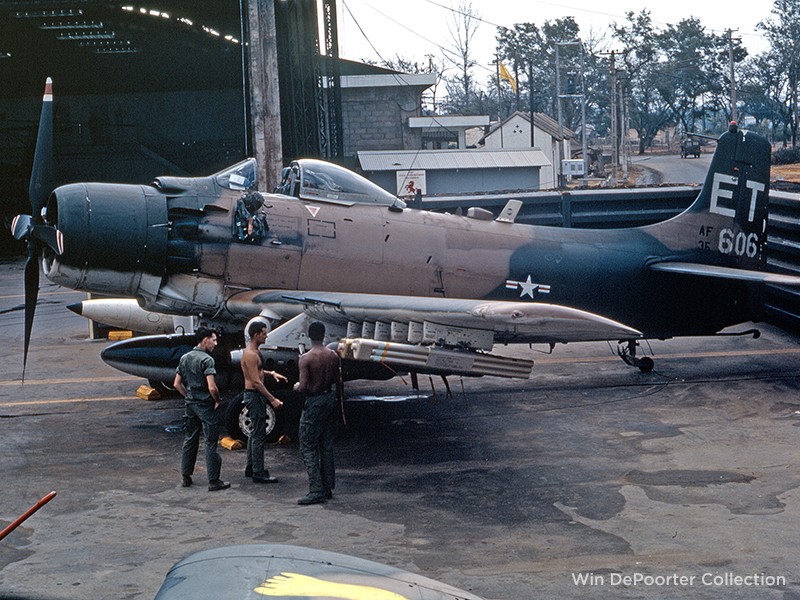 The Wiley Coyote A-1 Skyraider is pictured during its service during the Vietnam War. (Photo by Win DePoorter) 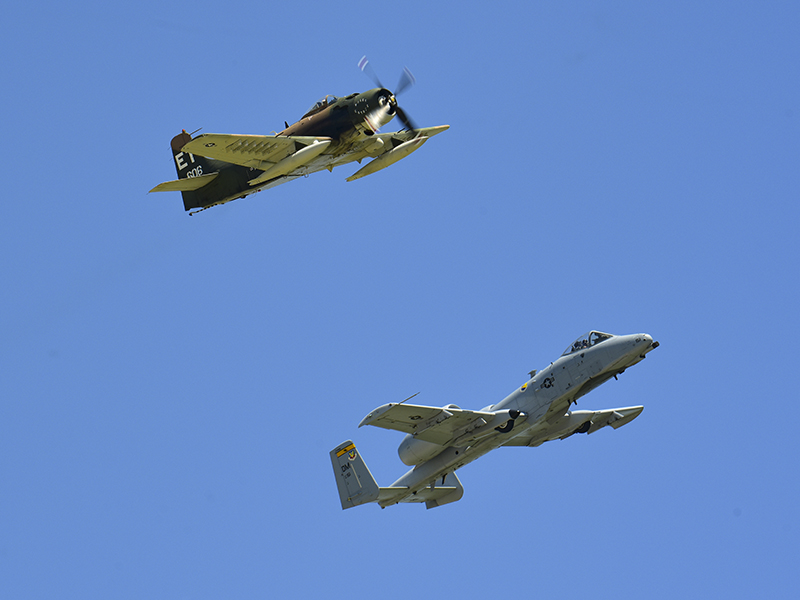 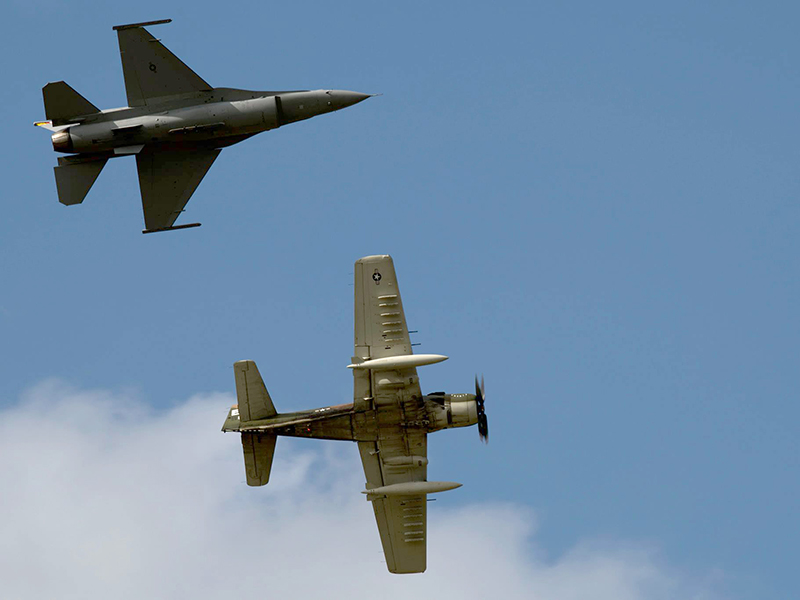