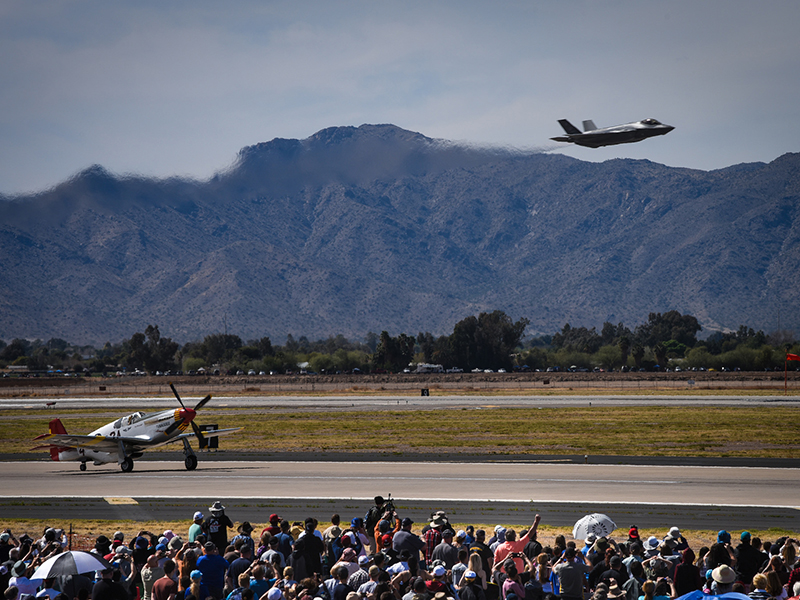 “The past year’s demonstration was sort of like an ‘appetizer’ if you will,” said Capt. Andrew “Dojo” Olson, F-35 Demonstration Team pilot and commander. The new profile this year will be the full ‘five-course meal’ showing fans everything this jet is capable of.”

According to Olson, the new 13 minute-long profile will highlight the F-35A Lightning II’s numerous capabilities to include speed, agility, and high-g turning.

“What makes the fifth generation fighter so special in general is the slow-speed, high angle of attack maneuvering it can do,” Olson said. “We’re also going to be performing controlled flat spins while falling out of the sky as well as high-speed passes and vertical climbs.”

Along with the new single-jet profile, the team plans to include the Heritage Flight display following the F-35A’s performance flying alongside older warbirds representing the past, present, and future of Air Force Airpower.

“For the 2019 air show season, we’re going to be a demonstration team,” Olson said. “The show we’re going to bring to fans is unlike anything they’ve ever seen and I really believe it’s going to set a benchmark for the demonstrations performed by any airplane on the planet. I think it’s really going to impress people by finally showing off the full maneuvering envelope of the F-35A.”

It’s here the moment you’ve all been waiting for! The F-35 HFT will officially transition to the F-35A Lightning II Demonstration Team! During our next season, we’ll showcase the F-35A’s full maneuvering capabilities to audiences around the globe. . . . #f35 #aviationdaily #aviationlovers #avgeek #avgeeks #militaryaviation #airshow #demoteam #airpower


Throughout the offseason, Olson is preparing for the new profile in Fort Worth, Texas where he’ll engage in simulated training.

“The training involved during the offseason is very intense,” Olson said. “It takes a lot of practice to fly the F-35A crisply and professionally to fully showcase its power and agility. We wrote the new demonstration from scratch hand-selecting all of the new maneuvers so their executable and repeatable to ensure safety.”

With the amount of operational support from the 56th Fighter Wing, Olson is confident now is the right time to transition to the demonstration team.

“We have the right amount of jets right now at Luke AFB to fully support what we need to do on the road with the demonstration team as well as continue to fulfill our primary mission at home of training the world’s greatest fighter pilots and combat ready Airmen.”

The quantity of fully combat capable (3F) F-35A’s within the fleet at Luke AFB will also enable the F-35 Demonstration Team to effectively demonstrate its capabilities while on the road.

“We have a wide variety of professionals within their respective career fields on the team this year who are at their absolute pinnacles in their career and it’s such an honor and joy to work with them on a daily basis.”

With 12 Airmen selected to be on the team for the upcoming season, Olson is looking forward to what’s in store for the future.

“I’m really proud of what our team accomplished last year, but I’m also very excited about the upcoming season to finally get to show air show crowds around the world the full potential of the F-35A Lightning II.”