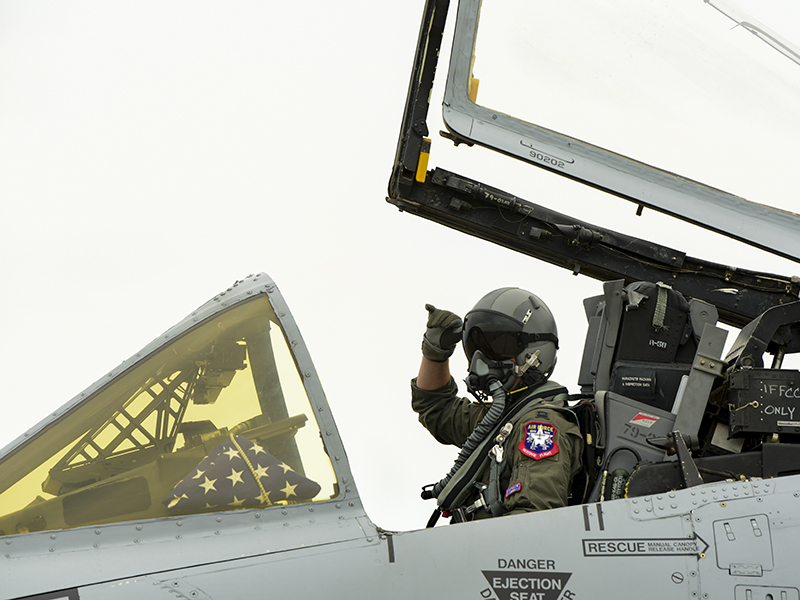 Capt. Cody J. Wilton commands the A-10C Thunderbolt II Demonstration Team, which showcases the power and capabilities of the attack aircraft to more than 7 million people at air shows around the world.

Capt. Wilton joined the Air Force in 2001 after graduating from high school. He went on to earn a Bachelor of Science from Excelsior College in New York and attended Officer Training School at Maxwell Air Force Base in Alabama. He has piloted the A-10 since 2011 and served as the demonstration pilot since 2017.

What AFHFF war bird most captures your imagination?

The P-47 and Skyraider. The challenges those airplanes had in respect to the power and speed that we have now are impressive and only provides more context to the immense amount of respect I already had for the pilots that flew them in WWII and Vietnam, respectively. The courage it must have taken to get down low in harm's way, at those speeds, in order to prosecute the enemy was immense.

What is your favorite part about Heritage Flights?

The pilots. They’re all extremely humble and approachable guys that will talk for days about aviation, sharing their wealth of knowledge with anyone interested. Also the crowd's reaction. As a pilot, the demo is the most challenging aspect of the sortie and therefore my favorite part, but everybody on the ground loves the Heritage Flight and the context it provides to the progression of airpower.

Have you ever flown a vintage war bird?

I have never had the opportunity to fly a war bird myself, but you can bet I'm looking.

The most difficult part is switching up your wingman or flight lead's aircraft on a constant basis. All the war birds fly differently with different power available and wing loading. The P-51 is smooth, steady and predictable, while the P-40 is lighter and slower, pushing me towards the back end of my power range along with making the formation more difficult as he's getting bounced around in turbulence a lot more than my relatively heavy aircraft.