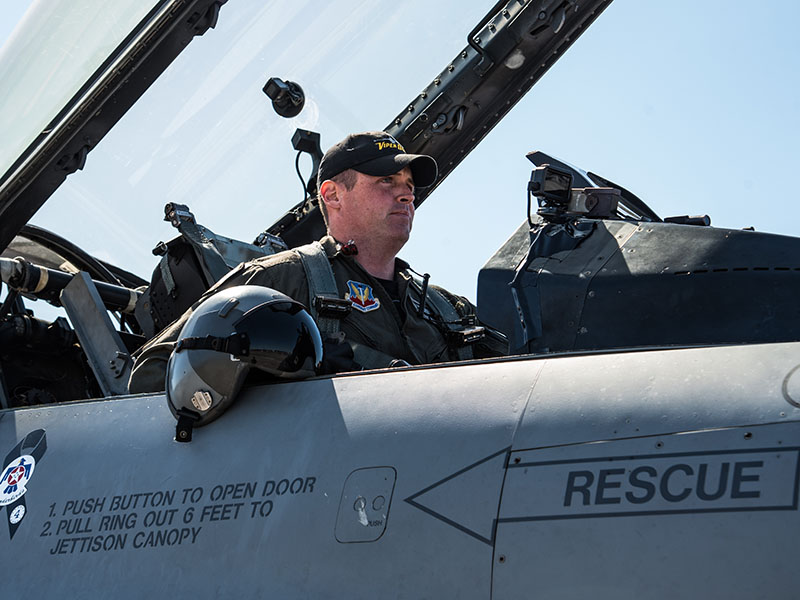 Maj. John “Rain” Waters serves as pilot and commander of the Air Force F-16 Viper Demonstration Team, showcasing the legendary aircraft’s capabilities in front of millions of fans at air shows around the world.

Waters is a seasoned fighter pilot with more than 960 combat hours in the MC-12W and the F-16. The Georgia Tech graduate earned his wings flying the T-6 Texan II and T-83C Talon at Columbus AFB, Mississippi, and went on to fly combat missions as part of both Operation Enduring Freedom and Operation Inherent Resolve. He currently serves as a member of the 20th Operations Group based at Shaw Air Force Base, South Carolina.

What AFHFF war bird most captures your imagination?

The P-51. I fell in love with the Mustang as a kid and it has always been my favorite. My grandfather was a gunner in B-17s and now I get to fly alongside the fighter that turned the war. It is humbling and still awe-inspiring to see the Mustang fly each and every time.

What is your favorite part about Heritage Flights?

Showcasing the history of our great Air Force and where we are going. I always have to take a step back and marvel at the fact at what our nation was able to accomplish in just a few decades. When you stop and think about how we have progressed in aviation in a relatively short period of time, it is pretty amazing. But in the end, despite the technological differences between the aircraft in the Heritage Flight, we are all doing the same thing...flying the airplane.

Have you ever flown a vintage war bird?

Not yet! It is on my bucket list. I was fortunate enough to ride in the backseat of a P-51. For me, that was a dream come true.

It’s fun to learn how to fly together. Speed is the biggest difference between most planes in the heritage program. Managing those differences forces each pilot to anticipate and understand the capabilities and performance of their plane so that they can fly safely in the formation.

We stand on the shoulders of so many giants that have led us to this point. Each made significant contributions that collectively pushed us further and faster. If I had to single out just one, it would be Robin Olds.  He's a fighter pilot's fighter pilot.  He proved himself countless times in combat, and his innovation and tenacity led to numerous aerial victories.  He cut through what did not matter and focused on what mattered.

You can read more about Maj. Waters in his official bio.